The first vermin in today's lineup, the zebrull ant comes from this set of mashup images. The image makes it seem kinda pathetic, but its bite, poison, and inherent ability to avoid being hit make it a decent low-level opponent.

High noon (well, CST) marks the midpoint of the mashup marathon. Yet another monster will make its appearance in an hour! 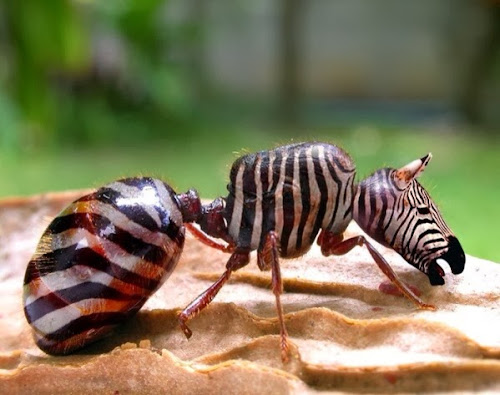 This gigantic ant has a striped pattern similar to that of a zebra, which somehow makes it difficult to fully focus on the ant.
Zebrull Ant CR 1
XP 400
N Small vermin
Init +1; Senses darkvision 60 ft.; Perception +0

Ecology
Environment any desert or plains
Organization solitary, pair, or colony (3–40)
Treasure none

Special Abilities
Blurred Pattern (Ex) The patterning on a zebrull ant continuously grants it the benefit of blur.
Poison (Ex) Sting—Injury; save Fort DC 13; frequency 1/round for 4 rounds; effect 1d3 Con; cure 1 save. The save DC is Constitution-based.

The creators of the zebrull ant initially regarded their creation a failure, since the creatures demonstrated the same lack of intelligence found in the ant component. However, they revised their reaction when they determined that the striped pattern on the creatures made them difficult to target. Those who kept the zebrull ants use them as shock troops or front-line combatants, while those who did not unleashed the creatures into the wild, where they have devastated great swaths of land.

Posted with Blogsy
Posted by Mike Welham at 12:00 PM