The mashup marathon returns yet again to the sea. I gravitated to a lot of aquatic monsters because they're somewhat underrepresented in the game, and also to give Patrick a handful of monsters he could hopefully use in his games.

The halfway point approaches in another hour. See you then! 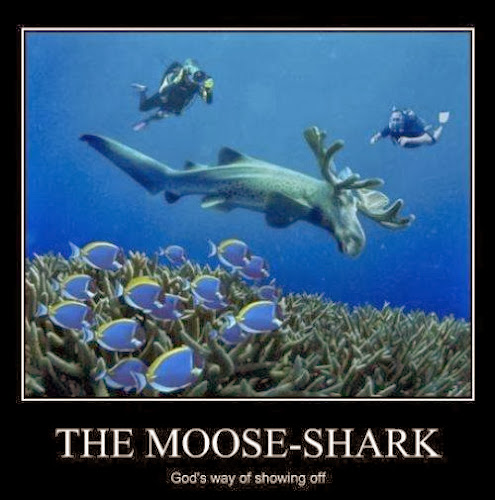 Special Abilities
Flexible Antlers (Ex) A moose shark's pliable antlers allow it to grapple opponents with its antlers. Additionally, it can inflict bite damage to a grappled foe and bite another opponent within reach.


The idea of combining a moose with a shark and imbuing the moose portion with flexible coral-like antlers may have seemed like a clever idea, but the resulting moose sharks proved to be intractable. As a result, the failed experiments were set loose to wreak havoc in the ocean, where they attack ocean dwellers and seagoing vessels alike. Fortunately, no known examples of a land-dwelling version of the moose shark exist.