Here is another monster that refused to be constrained to the animal or magical beast categories. Thanks to working on this feature, I've come up with a sort of mythology around the dread krakens, self-styled rulers of everything below the waves and plotters of the surface dwellers' destruction. One thing dread krakens love to do is make octopus-themed monsters that they can inflict upon the surface world, and the koalapus is no exception.

Two more monsters to go before this mashup marathon concludes. I hope you have been enjoying it thus far, and thanks for reading! 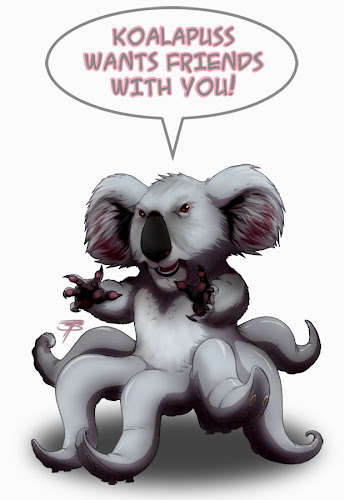 He just wants to give you a nice, long hug.

Special Abilities
Watery Tentacles (Sp) This variant of black tentacles works like that spell, but it can only be cast in water. It has a 20-foot-radius area of effect and can reach beyond the water's surface. Additionally, when a tentacle grapples a foe, it makes targeted dispel attempts (per dispel magic using the koalapus's caster level) against any spell or effect that allows a creature to breathe underwater.

Dread krakens, taken with terrestrial legends about the drop bear, decided to create their own version, suited to their image. A koalapus is at home on the shore and underwater, but it prefers to stalk and attack prey on land. A typical tactic for a koalapus is to climb a tree of average height and wait for someone to pass under it, at which point the koalapus either attempts to grab something from the passerby or drops onto the unsuspecting victim. Thanks to their liquid variant of black tentacles, a koalapus is even more dangerous in water. Despite the terror a koalapus sows in the dread krakens' service, they may have made a strategic error in creating the koalapus, for the creature is highly ambitious and will eventually desire to overthrow its master, with the aid of other koalapuses.

Posted with Blogsy
Posted by Mike Welham at 10:00 PM