We've been treated to a pretty thorough digestion of the announcements at this year's PaizoCon, so now my pal Mike Welham is offering up a more personal look into the con experience.  Thanks a lot, Mike!  Hopefully,  I'll join you one of these years. 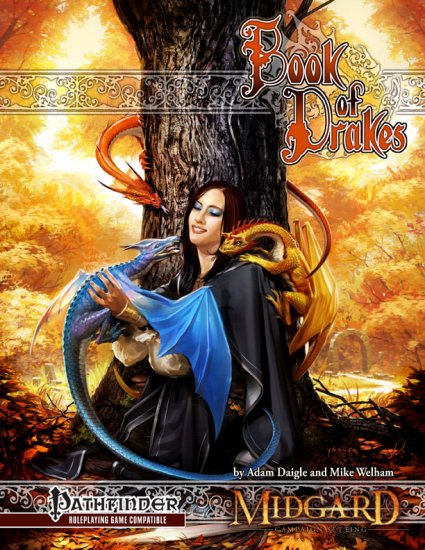 PaizoCon, originating as a fan convention before becoming Paizo took over a lot of the operation, is a relatively small convention—attendance this year topped 450 people. This gives us Pathfinder fans a chance to interact with fellow fans as well as nearly everyone in the company, which is a real treat to someone who finds conversations rather rushed at larger conventions.

This was my third PaizoCon, and I intend to go every year they have one (assuming my son’s graduation is not the same weekend next year, that is). Not only did I get to see people I’ve met at previous conventions, but I also saw a few people I have befriended on the Paizo message boards, mainly in FaWTL—Forums are Way Too Long.

Paris Crenshaw, one of those message board friends who I actually met in person at last year’s PaizoCon, gave plenty of great information about Paizo’s announcements. I’m not going to rehash those here. Instead I’ll just give you one random person’s experience, which I hope will not drive away regular readers of this blog.

Thursday
I learned the hard way in 2009 that I want to arrive early on Thursday and leave late on Sunday (or Monday morning), by missing out on the Meet and Eat and some Sunday afternoon panels. Determine to make it to my second Meet and Eat this year, I didn’t actually end up going, because the siren’s call of Wolfgang Baur’s Open Design dinner drew me away.  My decision might have been firmly set upon finding out that Wolfgang was buying the first round of drinks.

Not to worry, I caught up with my fellow convention goers in Dennis “Ogre” Baker’s room, where I had a delightful concoction created by a Mr. “Fox.” Unfortunately, there was some rum in the drink, so I got reacquainted with my annoying allergy to the stuff, which wasn’t bad enough to blunt my enjoyment of the company.

The highlight of the evening was seeing Hugo Solis, artist extraordinaire, who brought his copy of the over-sized Book of Drakes, complete with laser-etched cover. I might be biased since I am a coauthor on the book, but I was in awe of holding a physical copy of the book. Seriously, ignoring the “blah blah blahs” I put in the book, it would be worth it just for the art that Hugo crafted.

Friday
I got a lottery event! For the first time ever! OK, I missed the deadline for last year’s lottery due to some life chaos, so that was on me. I played a druid who could talk to plants, animals, and the wind, in Kevin Andrew Murphy’s “Star of Prizendorf.”  Interrogating palm trees regarding the theft of an important jewel was as fun for me as it was baffling for the rest of the characters/players.

Afterwards, I dropped by the store to pick up copies of The Time War—Super Genius Games’ PaizoCon-only offering—for friends. I also planned to do a little shopping for myself while I was there. What was originally an errand run/shopping trip turned into a little bit of fun work, when Shelley Baur roped me and Adam Daigle into autographing “ashcan” copies of The Book of Drakes, printed and transported by Hugo Solis. It’s still very surreal to me.

I got some unintended exercise thanks to Dave Mallon (Eldritch Mr. Shiny on the Paizo boards), who wanted to print some copies of illustrations for his portfolio. 1.5 miles is what Google Maps said it took to get to FedEx/Kinkos, and I felt confident I could make a 3 mile round-trip. What Google neglected to mention was the 20 degree incline on the way to the copy shop. I felt my age and my sedentary lifestyle catch up to me on that journey, but it was good company at least.

Friday night was spent in the Coast Bellevue bar, drinking copious amounts of Purple Paizo Punch with FaWTLies and special guests Gary and Sara Marie Teter. My PaizoCon roomie, Justin Franklin, worked very hard to get details of Gary’s plans for the Paizo website. The code name “Twiddler” came up a few times, and Gary gave us hope that a private messaging system (complete with group PMs) will debut in the future.

Saturday
There were plenty of scoops to be had on this day, which you’ve already seen. Additionally, I got to participate in two creation exercises—Adam Daigle’s “monster in an hour,” where 30 of us created an ooze which sucks its victim’s brains out, and at the RPG Superstar panel, where 50 of us decided a corset would be an interesting magic item for the first round.

The highlight of the day, though, was the afternoon snacktime conversation Justin, Paris, and I had with Paizo co-founder Lisa Stevens and Paizo’s “godfather” Ryan Dancey. We learned some eye-popping things about creative accounting at previous companies and got an excellent glimpse into Lisa’s vision for the company.

Saturday night was, of course, the banquet, where we FaWTLies (and honorary member Gavin Smith sporting a lovely Red Mantis Assassin costume) sat with Gary Teter. We were torn, though, because Gary and Sara Marie got split up this year as opposed to last year when they got to sit at the same table. It was like having to choose between one’s parents after a divorce. As luck would have it, Gary couldn’t stay long, since the server decided to go down during the banquet. Had he been there, he would have been proud of us absolutely stunning Mark Moreland during the trivia contest.

After the banquet we had more purple punch and more conversation with Gary and Sara Marie. During my attempt to return to my room to get some sleep, I ended up talking to a myriad of people and showed off The Book of Drakes to Paizo staffers.

Sunday
The previous night we made ambitious plans to play in a Pathfinder Society game at 8 AM. Surprisingly, we all made it (except for Sara Marie, but Gary told us not to expect her to be up that early). Mark Moreland and Hyrum Savage made sure we got a table, which was nice, but the chap running the game was less than prepared to run a game. By then fatigue was setting in, though, and we weren’t nearly as rowdy as we should have been. The experience made me vow to run Society games next year, so we can hopefully have a full FaWTL experience.

Sunday afternoon involved us winding down, first around a game of Kill Doctor Lucky, then just sitting at the table fighting off sleep. We had one last meal together before everyone else took off on their red-eye flights. I at least got to sleep in the hotel room for one more night before having to fly back across the country.

I left PaizoCon glad to have met old friends for the first time, as well as brand new friends, and I also left with a hopeful sign for my future as a freelancer. I hope to see everyone again, and some new faces, at next year’s convention!

Posted by Theodric the Obscure at 10:52 PM