No one starts from scratch.  But to even make a world look new, alien, original, and otherworldly, is tough.  I'm sure that Frank Herbert had both oil and drugs on Earth in mind as he built Arrakis, but those are not the first things one thinks of when one hears "the spice melange," one of the highly original elements of the internal verisimilitude that is Dune.  Instead my minds travels from the desert to the worms to the Fremen to the spice trade to the navigators to folding space to the empire and on and on.  No matter what route the development of the Dune universe takes, it may reflect its light back on Earth, but it never grounds me there.

Sadly, I am not Frank Herbert (who, in my book, may be the equal of Tolkien when it comes to world-building).  But on the other hand, I don't want to be as bald as Gygax in his Mythus and have Aerth, Aegypt, Aeropa, etc., even when I am coming close to this kind of alternative Earth as I am in Ygg.  So while I start from real world analogues, I'm looking for a trajectory that starts with the analogy and then develops it in original ways.  If you've been keeping up, you've already seen me start with real world mythemes like Yggdrasil or Atlantis, or real cultures like the Norse and classical Greek, and drop them in as major elements and references points.  Even when I haven't done anything with them, these elements that I lift give me and the players a ballpark idea of what would fit in certain areas of the world or where the creative process is at least going to start, even (or maybe, especially) if the end product is largely unrecognizable from the point-of-view of its inspiration.

Another example for me are the Persians: a distinctive culture and empire from ancient times, they were later one of the great Islamic empires, and culturally continued into Mughal India.  As a fan of The Thousand and One Nights (a great deal of which is actually Persian rather than Arabian in background) who is dying to read The Shahnameh, I felt that this rich mine had not been adequately tapped in fantasy settings, least of all by me.  Thinking about what I already knew, I knew that Zoroastrianism had a tradition of dualism and fire worship to tap into, but I didn't want to simply reproduce a fantasy version of it.  I had always liked the idea of the lion (especially the maned head of a male lion) being identified with the sun.  I started looking at Persian symbols and words and found khorshid for the sun and sher or shir for lion.  Thus was born one of the two main deities, Khorshir, personal patron of the Emperor.  I saw Vata as a name of a wind deity, which reminded me of the Vaati or Dukes of the Wind.  I had my second, opposing deity.  What to call this immortal empire of the East?  Aryanastan seemed an obvious choice.

This is how I proceed when I know enough to be dangerous.  When I know somewhat more, I take language more seriously:  Take the long unnamed "Peoples of the City-States of the Middle Sea," inspired by the Greeks.  I always liked the name of the great city, Thessaloniki.  The Greek ideal of Kalos kagathos or kalokagathia -- "Beauty & Goodness" -- inspired me to call them after Kalokaniki  or "Beauty & Victory," a compound that looked like it could have been misheard and vulgarized to create the words classic and classical. This yields the plural, Kalokanikai (kah loh kah NEE keh).

As the lands multiply, the question arises: Now, what to do if one, like me, has no creativity in his hands to speak of?  Instead of drawing an ugly (and largely unintelligible) map, I started with a diagram I could easily make on the computer as an abstract stand-in.  I could later use it to make a map in Hexographer. Due to its abstractness, I don't mind players getting some minor spoilers from the map. Some entries may be temporary. 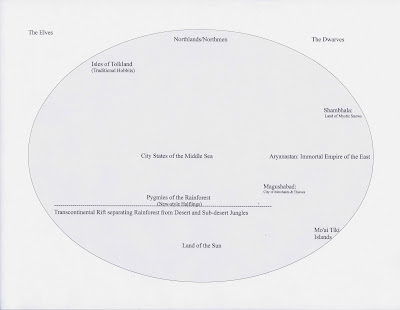 How do you use analogy in your world-building?  I'd be interested to hear your thoughts in the comments.  As the week progresses, I'll add notes about these updates about these lands and cultures in the respective game tabs.
Posted by Theodric the Obscure at 5:54 PM