The gnomish clockwork scope-goggles I acquired seem to have been well worth the trouble and expense, for I've got a scoop!  Our friends over at Clockwork Gnome Publishing have been busy, as usual, and will soon be announcing three new Pathfinder-compatible products:
Finwicket's Chronicles: Sailing the Starlit Sea
Professor Finwicket shares his stellar discoveries made thanks to an ancient ship that can sail the heavens. Includes rules for travel, exotic planetary settings, and alien creatures. 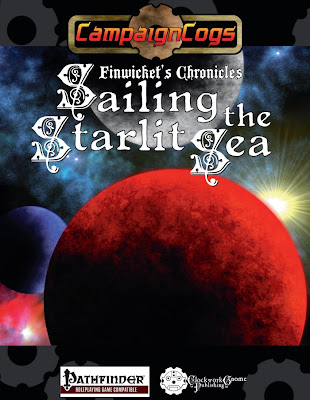 Finwicket's Chronicles: Beyond the Faerie Path
The sequel to Along the Faerie Path expands on the realm of Faerie.  I am particularly excited about this one as a Chestertonian,* because it promises to reveal some of the mystical laws of Faerie.  Also, I feel like I run into a lot of nervousness amongst gamers that fae come off as twee.  I expect that in this case, they are going to be rather twisted, but here's my question: how to use the expectations of twee to turn up the twist? 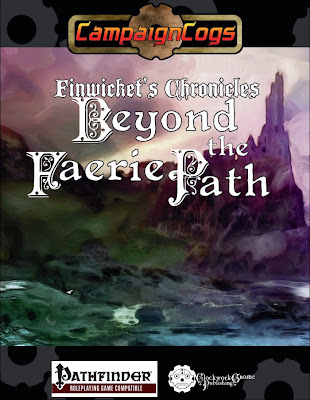 The Virtuous and the Vile: Gods of the Outer Void
The qlippoth lords of the outer void have discovered away to manipulate lesser beings into releasing them.  Challenge your players with nasty dose of Chaos in the form of foul rites, myths, spells and magic items from these imprisoned menaces. 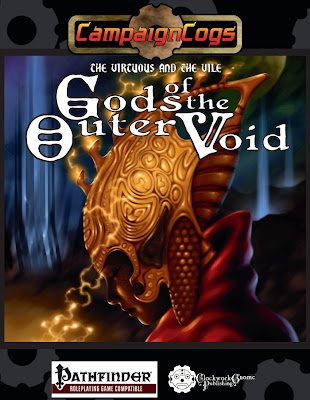 Links to the press release will be added to all the images above, just as soon as it comes up.  The machines in the burrows also whisper to me that the Labyrinth Lord conversion of Finwicket's Bestiary: Along the Faerie Path is nearing completion.  I'm happy with the pace, subject matter, and quality I am seeing out of CGP, especially as the ranks of third party publishers and the amount they are putting out shows no signs of anything but growth into the foreseeable future.


* See this earlier post. I'm surprised I didn't link Chesterton's essays on fairy in that article.  I might add those links later, as they are public domain and available now online.  I still haven't taken the further step of reading George MacDonald's essays in full, but I'm told that there is some dependence on MacDonald here, and of course this entire tradition comes down to both Tolkien and C. S. Lewis.  Analyzing that will be a task for a later day -- as will seeing how their line diverges from William Butler Yeats.
Posted by Theodric the Obscure at 4:49 PM