Daddy Grognard's recent post gave my memory a helpful jiggle: the last time I played with two of my nephews (J - 4th grader; Q - 5th grader), their party encountered a brownie.  Q asked, "What's a brownie?"  (I blame too many hours playing first person shooters.)  J responded, "It's like a little elf."  He then drew the awesome picture below on the post-its I keep handy during our games.  I believe he also referenced the Keebler elves. 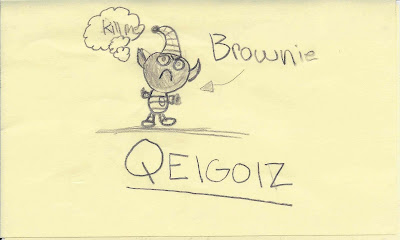 I like the implied attitude of the brownie, although his suicidal thought bubble is a little troubling.  The drawing likely was influenced by the brownie's unhappiness at being captive more than the simplistic, regrettable gaming attitude that all creatures encountered are for killing.  (My nephews are smarter than that: they've killed, negotiated, hid, and run, as appropriate.)  We tried randomly generating the brownie's name using dice.  (Meh, Qeigoiz is okay, I guess.)

The setup was this: the local townsfolk were the object of fey curses going beyond the usual harmless pranks, leading up to the death of the town cobbler.  The town's wizard recruited a party to go to the faerie mound to speak with the faerie queen to find out why the faeries were unhappy.  The brownie had been captured by the wizard, with the promise of release once he led them to the entrance of the faerie mound.

So far, the boys have learned all kinds of things about the faeries.  They keep Moldvayian killer bees* in the woods nearby both as protection and to harvest their honey for, among other things, faerie mead.  Their sensitivity to iron** means they have enchanted into being a brood of creatures that you may be familiar with:

Whoa, those rust monsters gave the party a fit!

Taking any single fey creature, such as the brownie, can provide an entree into how you construct the fae in the setting of your fiction, game, or whatever you are working on.  The traditional categories for faeries are Solitary or Trooping and Seelie or Unseelie.  I have been wondering if, in regard to first set, a third option isn't needed: Domestic.  Brownies are a domestic faery.  They don't troop and live in fey communities in the wild, and they don't live separately from human and fae alike.  They live in human (perhaps also demi-human) dwellings.  Now the second dichotomy is usually interpreted to mean Good or Evil, respectively.  However, here are some further possibilites for members of the Seelie (S) and Unseelie (U) courts:
The first set of categories tells you about the fae's ecology, the second set about their behavior and potential for conflict.  Whatever court you imagined the brownie owing allegiance to, you are now faced with the question of why they live with humans.  Curiosity?  Protection?  Ambassadors of good will for their court among humans?  Spies?  Thieves?  Maybe some of each? While the brownie in this example served initially as a story device, answering these questions and others like it contribute to world-building, and provide further elements for the continuing adventures of my nephews' characters.


* 2-3 feet long, and delivering a potentially lethal sting, for those unfamiliar with them.
** This also gives another reason for elves' use of mithril/mithral.
Posted by Theodric the Obscure at 12:22 PM