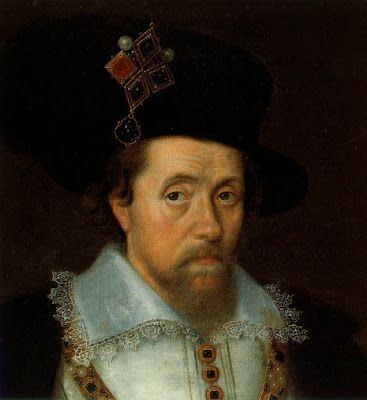 This year is the four-hundredth anniversary of the translation of the Bible authorized by King James I of England and Scotland.  Popularly known as the King James Version or the King James Bible,* for over half of its history it was known in English contexts simply as, the Bible, so much so that when an English bishop in the mid-nineteenth century reminded his clergy as he held it aloft that "This is not the Bible," he drew audible gasps.  Along with the works of William Shakespeare, this Bible is both the foundation of and the pinnacle of English literature: the only two works that deserve the designation of primary classics in the English canon.  While this is true of its substance as well as of its language, I am going to set substance aside with an assertion whose truth can rather easily be discovered by those who have yet to learn it: one cannot meaningfully enter the thought world of the English tradition of literature in ignorance of it.  To the extent that you want to locate your mythopoesis in this sphere of cultural interaction, you must have mastered this classic text.  Having dealt with that in one sentential swoop, I am going to focus on other lessons that can be learned from King James' translation.  These fall into two groups: 1. Historical (with an RPG rule suggestion) and 2. Linguistic. 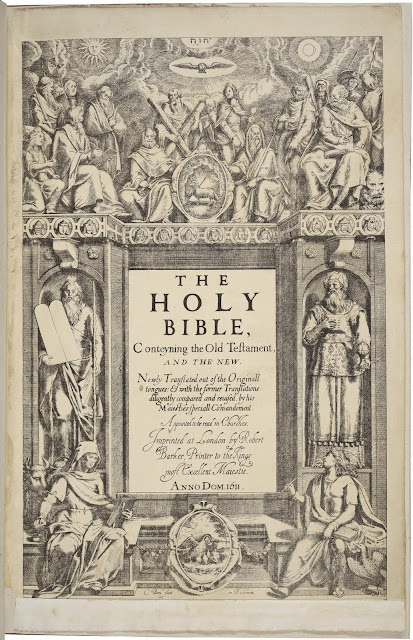 1. The Historical
There are a number of excellent books about the story of the King James Bible available in this anniversary year.  I have just finished Alister McGrath's In the Beginning, and can recommend it as a good and informative read with only two major criticisms.  First, it is much lighter on the reception of the text than it is on its background and production and it would have benefited from the final two chapters being expanded.  Second (and this is probably the fault of Anchor Books rather than the author), though it is written by a scholar, its pitch at a popular audience resulted in its being shorn of foot- or end notes.  Even as a popular work, it should have assumed an educated audience and had minimal notes.

McGrath points out a crucial development that played a part in the transformation from Medieval to Early Modern Europe: the rise of the middle class.  The rise of the middle class resulted in a cycle of more literacy/more demand for affordable books.  And it was this complex of increasing demand and developing the technology to supply that demand that led to the availability of printed codices of translations of the Bible into the vernacular languages (which, by the way, was a significant business interest).

Now, for the fantasist working on setting or world-building, I have often seen the concern raised about the existence of gunpowder and how to handle (i.e., usually eliminate) that.  But this history raises another concern: how widespread is literacy and how is it concentrated in your setting?  How is it related to the existence of a sizable middle class?  Answering these questions will be important for identifying what kind of world it is and how things work in that world, as well as what it will tell you about your characters.

When it comes to fantasy RPGs, these questions are no less important.  Thinking about PCs and NPCs, are they more likely to come from the aspiring, upwardly mobile middle class, the desperate peasants looking to break out of poverty, or failed members of the upper class?  Are they more or less likely to be literate?  Here is an optional rule I have been playing around with: to represent literacy as an accomplishment, require one language slot of a PC to speak a language and a second slot to read and write it, unless the PC is a magic-user [wizard/mage] or cleric.  I will likely try this rule out in the (delayed but hopefully still happening) Ygg campaign.

2.  The Linguistic
If you want to be able to produce exalted, majestic English, all of the King James Bible and a good deal of Shakespeare are your greatest sources.  If you want to produce archaic English, the Bible is a better source than Shakespeare.  Though the two are roughly contemporaneous (Shakespeare starts some years earlier than 1611), the Bible is purposefully archaicizing.  The King's translators were charged not only with producing the most accurate translation based on the scholarship of the day, but with changing as little as possible of the wording of the already existing (but not popular) Bishop's Bible (1568).  Furthermore, the translators recognized the excellence of the work of William Tyndale (1522-1537) and relied heavily on his work as well.  These translations were themselves genealogically related, and coming as they did in a period before changes in the English language accelerated, retaining their constructions meant retaining an earlier form of English (this accelerated phase of linguistic change may be observed in Shakespeare, who is not consistent about using the singular [thou] and plural [you] forms of the second person pronouns and the old verb endings that go with them and who often uses the modern forms [you] we are familiar with today).

It is not easy for someone such as myself, who was raised reading Biblical English, to deal with one of the most lamentable facts of our failing culture: many people cannot read Early Modern English.  My students have forced me to accept this fact.  I expected to find it at the community college, but when I found it at the seminary, I will not describe the extreme acts that tempted me.  So we live in a day where use of the old classic is diminishing, but also in which Shakespeare is paraphrased for college English classes and Richard Hooker is paraphrased for Anglican seminarians.  Speaking for a moment only to native English speakers, cutting ourselves off from our literary past is a severe cultural impoverishment, rendering us only partly literate in our own tongue.

For those wanting to avoid this sad fate, there is no cure other than reading to increase proficiency.  Happily, we live in a day where the best version of the King James Bible ever is available: the New Cambridge Paragraph Bible -- and in cheap formats!  Some folks may also be interested in one of the anniversary reprints that seem to be springing up everywhere.  While these reproduce some important parts of the 1611 printing exactly, the biblical text itself is a reprint of the 1611 text from 1833.  This gives them an old look and reproduces the old spellings, but provides the advantage of a text in Roman type.  I can't imagine modern readers struggling with both the language, the spellings, and Blackletter typeface at the same time.  So if you prize "feel" over easy readability and scholarship, get a commemorative reprint, but if not, go for the NCPB.  However, even if you start with a run-of-the-mill printing like a Gideon Bible, you are entering a world of style and diction that will elevate your own poetry and prose, as well as open up a body of literature that is becoming increasingly a treasure hidden from the masses.  As always, thanks for stopping by, and I hope you profited from this week's Mythopoeic Monday.


NB: The NKJV or New King James Version is not what you are looking for.  Move along.

* Abbreviated variously: KJV, KJB, and AV for Authorized Version.
Posted by Theodric the Obscure at 3:45 PM