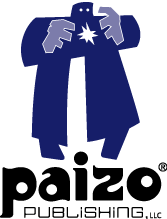 9.  Jade Regent involves getting Amiko back to her rightful position as ruler of Minkai. Oni (ogre mage, giant oni, tengu oni, human oni, and goblin oni -- think [the] hobgoblin ill[ustration] from [the] 1e Monster Manual).  Jade Regent will cover Crown of the World and Tian Xia, including a Mongolia analog.  Crown of the World will include environmental rules, equipment, and a gazetteer.  Imperial dragons in the Jade Regent bestiaries.
10.  Next AP will be Pirates! Calling it Skull and Bones right now [working title].  Mirrors Kingmaker, where you start out small and become a pirate lord.  Ship to ship combat and large-scale naval battles.  Start out as a prisoner on a ship.  Probably culminate in an invasion from, say, Cheliax or some other country that doesn't like The Shackles.  Pirate prestige class of some sort will show up. This adventure path will disallow paladins (as presented in the core rule book).  Or at least discourage them.


Modules
Sorry it took me so long to get this up, moles and readers...I fell asleep!

EDIT: Someone has put up an audio link for the seminar on the future of Pathfinder adventures.
Posted by Theodric the Obscure at 3:31 PM